Ben Elgan is a crossover trumpeter, his professional performance credits include the performances with the Ocala Symphony and the Gainesville Orchestra, as well as in commercial groups such as Less Than Jake, Sooza Brass Band, Sister Hazel, the Andrew Theilen Big Band, Act of Congress, and Nationwide Coverage. He has also performed in conferences such as the Southeastern Conference Symposium, the International Trumpet Guild Conference, the National Trumpet Competition, and the Alabama Music Educator’s Association conference. Ben played the expressive trumpets on the mariachi tune, “Señorita Mariposa.” 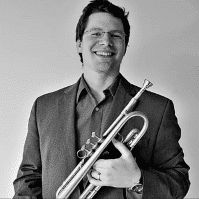