Scott Wilson is the Director of Jazz Studies at the University of Florida and a former world-champion breakdancer! Previously, he was the musical director for Universal Studios (Japan) where he organized, arranged music, and performed for the live shows. Scott is regarded as one of the best EVI players in the world and is a brilliant keyboardist and trumpeter. For the album, “Ritmo y Rima”, Scott contributed as a keyboard percussionist adding auxiliary sounds to several sounds such as bongos, chimes, bells, triangle, and so forth. 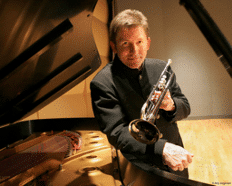